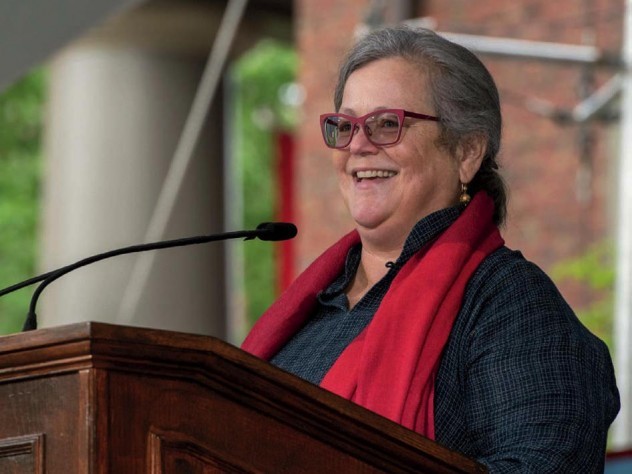 In late May, the Harvard Alumni Association (HAA) Executive Committee made a decision to recognize the First Nations people from the Americas and from all around the world: all future HAA board and annual meetings will open with a formal acknowledgment of the alumni community’s debts to and connections with indigenous people.

“The HAA is so much about belonging and connection to a place,” explains 2019-20 HAA president Alice Hill ’81, Ph.D. ’91, who spearheaded the effort. “I thought we couldn’t talk about that if we didn’t acknowledge the traditional owners.” In developing the language for the HAA acknowledgement, Hill said she was inspired by the practice of “acknowledging country” in Australia, her current home. “Country is not land—country is much bigger than that. Country is people, country is the environment,” she said. “In Australia, all indigenous people acknowledge and pay their respects to all other indigenous people, as well as the people who are the traditional owners of a particular land.”

Taking the Australian approach allowed Hill to avoid an excessive focus on the land—which she said raises issues of contested ownership—and to be inclusive toward all indigenous affiliates, no matter where they come from.

Hill said she felt an “urgency” to implement this initiative after addressing a group of indigenous students and their families at a graduation dinner in 2019. Almost all the students cried, she recalled, “because they felt unseen at Harvard.” She explained that the experience “cemented,” for her, the need to formally institute the practice of acknowledging indigenous people and their contributions to the University at HAA meetings.

Hill also credited NAAHU board members Patrik L. Johansson, M.P.H. ’01, and Tobias J. Vanderhoop, M.P.A. ’08, for their support throughout the process. Vanderhoop noted that the first Native Americans known to have graduated from Harvard were members of his tribe, the Wampanoag people of Martha’s Vineyard. They attended Harvard Indian College, established under the Harvard Charter of 1650, which states the University’s goal of furthering “the education of the English and Indian youth of this country in knowledge and godliness.” (The Indian College closed in 1670.)

Vanderhoop explained that the HAA acknowledgment is “important to [indigenous people] and to the health of our spirits.” “It can be very difficult to show that this is a place where you belong,” he said, “because your culture isn’t often represented.”

“We consider it a major milestone,” Van Dyke said. “It won’t, in and of itself, suffice for the changes needed. But it’s a really great step.” This step became possible, she added, because Harvard clubs across the globe co-sponsored a February event she and Hill planned for alumni to learn how to support indigenous people. That turnout, she explained,  made them confident that a move to institute a formal acknowledgement would be well received.

“An Anchor for Everybody”

THE ACKNOWLEDGMENT OPENS BROADLY, stating that the “Harvard alumni community has been anchored and enriched by First Nations people from across the Americas and around the world.” It then recognizes “the traditional custodians of the place in which we meet, the people of the Massachusett tribe and their elders—past, present, and emerging” and honors the land, “which remains sacred to the Massachusett people.” It goes on to pay respects to “the Nipmuc and Wampanoag peoples with whom Harvard has a long historical relationship” and “all other First Nations elders” who are present.

HoChing said the acknowledgment’s breadth is a strength. “It not only focuses on the First Nations people specifically in Massachusetts,” she said, but also “the idea that Harvard does host,” and has within the alumni body, “representatives from all these different indigenous communities.”

“We wanted to acknowledge that in any HAA gathering, if there [is a] critical mass of Native alumni, most of them won’t be from the Massachusetts tribes,” Van Dyke added. “If we’re lucky enough to have elders of any tribe, [we’re] wanting to acknowledge their presence.” The HAA welcomes the feedback of these Native alumni on the language of the acknowledgment, she continued: “It can still be an iterative process.”

The Executive Committe of the HAA Board of Directors has also adopted an indigenous acknowledgment for its website; that version quotes the Harvard Charter of 1650. “You would be really surprised to know how many students, faculty, staff, are just unaware of the original charter and how one of the objectives of Harvard when it was founded was to educate Indian youth,” HoChing said. “It’s keeping Harvard accountable” to one of its original goals.

Native American men were among the University’s first graduates, Hill added, but few people know that history: “I mean, I went to Harvard as an undergraduate, and as a graduate student, and I had no idea. And I think that’s a shame. I think it’s a loss for all of us.”

The HAA acknowledgment thus is a gain for all alumni, according to Hill. “How many of us speak the languages or have the culture of the countries of which we might be considered the traditional owners? Not many of us do; probably 90 percent of the world’s population has no deep connection to place,” she said. “If you think about the indigenous communities in our community, it’s actually an anchor for everybody.”